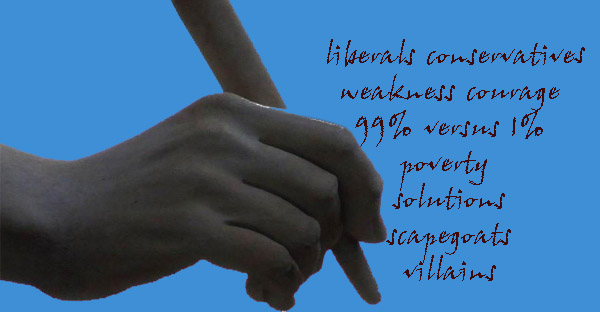 Many of my liberal friends seem to worship weakness, suggesting that they are more Christian than they realize.  After all isn’t  the 99% Movement a lot like the sort of grassroots uprising that Jesus Christ might have organized?  Gather up all of the weak, convince them that the only reason that they are weaker than the strong is because they have moral superiority over the strong.

Then again, a lot of my liberal friends say that if Jesus was alive today, he would be considered too liberal by Republicans.  So perhaps I am just late in realizing that both liberals and conservatives are proud to worship weakness in the United States.

Let me be clear about something, I am not calling 99% of Americans weak.  I am not trying to demonize those who need help or ask for help.  I am, after all, a proud liberal.

Why am I a liberal?  Because I think that the more we help others, the stronger we are proving ourselves to be.  Investing  in others and allowing others to invest in us is all about strength.

It is all about having compassion for each other and positive goals for ourselves as individuals and as a society.  I want to increase taxation on the rich, because I think they are strong enough for it.  I do not want to punish them.  I want to increase services for the poor, because I think such services are investments in people with a lot of potential.  I do not see a person who has lived through homelessness or poverty as weak.  I have known too many people who have gone through the worst forms of abuse and poverty to say that they are weak.

I also want to solve problems, understand this amazing world we live in but not with simple solutions.  The simplest solution for any problem that I have ever known involves finding a villain.

I do not want to make my liberal friends into a collective villain right now.  I want to do the best sort of battle with them, a battle that is fierce and respectful.  I want to empower.

The 1% is not the cause of our problems.  This does not mean I think the 99% or any percent should blame themselves.  Regardless of whether you have done everything wrong or nothing wrong, self-blame helps no one in the long term.

Rather, we need to look to what we can do to help chart a more positive future.

This is by the way, the sort of advice we often give to those we love.  If your loving parents were homophobic and they are starting to realize they were wrong, I imagine you do not try to make them feel bad.  You do not say, “Mom, Dad, you are evil.”  You do something much more powerful, you offer understanding.

This is not so easily done when it comes to people we do not actually know.  Why?  Because we forget they are human beings?  I wish!  It is because we enjoy having villains and actively want to forget that they are human beings.  It is not so easy to do when it comes to people we know.  It is a sort of xenophobia of the soul.  The chance to pronounce someone with no connection to us a villain is too good an opportunity to pass up.

I am not suggesting we worship wealth.  That is silliness.  There is a lot more to a person than being rich or poor.  Also, whether you consider someone  rich or poor  has a lot more to do with your own economic state than it does with theirs.  I venture to say, that if you are reading this online, you are rich to more people than you are poor.

If someone makes a lot of money, they should pay more taxes than those who are relatively poorer.  I strongly support progressive taxation.  I strongly support regulation and egalitarianism.  I already mentioned my support of more social services.  No one in America should be homeless, malnourished, without healthcare, or unable to access higher education because of financial reasons.

Since I have been implying and am now stating that Republican economic ideas are stupid, I am sure this post will leave everyone annoyed with me.

Almost everyone.  I think I am okay with that though.  I hunger for the exception that I know lives out there.  I know she is much rarer than 1% of anything, and that makes her much more valuable.

06 May This entry was published on May 6, 2015 at 5:40 am and is filed under Opinion, Uncategorized. Bookmark the permalink. Follow any comments here with the RSS feed for this post.

Older: A different type of couple
Newer: Half of a Face