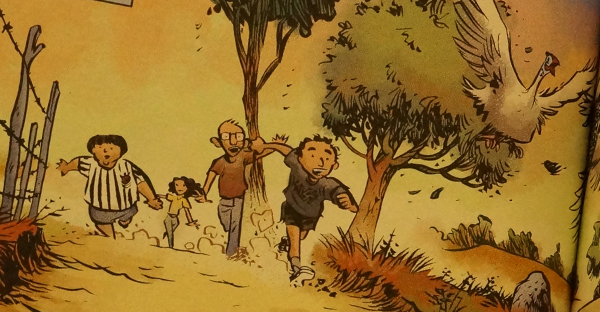 by Marina Girgis.  Winner, One Book One College Contest.

Here I am in a world that I do not understand, yet I am having all the fun you could imagine. It was the only time that being given responsibility could make me so happy and excited.  This is the world of my Grandfather’s Ranch where the family would gather for any occasion or any traditional celebration. Whenever I think of those joyful memories, I am filled with all the ecstatic emotions that I greatly miss. I would like to travel back to those times by sharing those exciting, lively, dutiful moments. I will try my best to make you enjoy this journey to the past of my Grandfather’s Ranch.

It must have started in the early years of my life, maybe even before I was born. But as far as I can remember, I vividly recall those times since I was five years old. Today I would like to share with you a particular visit to my grandfather’s.  It was the most cheerful and heartbreaking at the same time because it turned out to be my last visit.

It was the mid-year holiday in January 2006, my family and I woke up at six a.m., placed the luggage we had prepared the day before into the trunk of the car. The drive took us two hours but I did not get bored because of the excitement of getting there. Instead, I used that time to devise the games and activities that I would play with my cousins. When we arrived, my grandpa and grandma welcomed us, as usual, with their warm greetings and angel-like smiles.  While my parents were taking care of the luggage, I went to play with my cousins who had arrived before us. They are Julia, who was six years old, her brother Peter being nine years old, my brother Karim who was ten years old and I being the oldest, was eleven years old.

The ranch was relatively small compared to other neighbors’ ranches but still we had a lot in our ranch. There was a pen and a cattle barn. The pen had chicken and pigeons. The cattle barn had cows, lambs, buffaloes and goats. There was also a horse stable which had a couple of horses. Besides that, we had two dogs Rex and Kite. We had a small house that had five  bedrooms.  A large part of the ranch was used for planting.  We planted flowers, vegetables, and orange and apple trees.

After we enjoyed breakfast, gathering with the whole family, my grandma, as usual, started to assign tasks among the grandsons and granddaughters.  I was assigned to milk the cow while my brother had to collect the eggs from the chicken pen. Peter was given the responsibility to feed the dogs and his sister collected the vegetables from the backyard. We would argue sometimes for taking the task that was assigned to someone else, blaming grandma that she did not love us but instead loved the other cousins more. However that was not because we doubted her love, but instead we wanted to receive more cuddling, dandling and her sweet words of love.

When we were done with our assigned tasks, grandfather, Antoine, called us so we could chat with him, and so he could tell us stories. We talked about various topics. Grandfather, as always, began telling us the story of how he got his ranch from the government, and how it was not suitable for agriculture that he had to start from scratch. We were already getting bored from hearing it every time, we did not find it appealing or exciting anymore. Had we known it was our last time hearing it, we would have been more attentive and excited. When I grew up, it became more apparent to me how my grandfather was a great and amazing man when he decided not to give up on this abandoned and deserted land. He insisted on infusing the land with the life it needed, creating the ranch that filled our memories with our happiest moments. Therefore, as a matter of regret, I would like to narrate my grandfather’s story here:

It was in 1968 when the government promised those who graduated from agriculture major to receive land. My grandfather was the son of a poor man.  He did not have any assets and thus saw it as an opportunity to fulfil his dream that one day he would provide his future family with a property that they would be proud of. It was like a dream to receive a land of his own, so he was determined to graduate with agriculture major. Indeed after he graduated, the government gave him the land but the catch was that it was not suitable for agriculture.  The whole area did not have the basic needs of life: no water, no electricity and no services. A lot of his friends were frustrated and so regretted joining this major that some immigrated to other countries and others decided to change their careers. However, my grandfather decided to take the land and do his best to fulfill his dream, despite his friends’ words of discouragement.  They kept on telling him that they had been fooled by the government and that he must be crazy if he believed he could repair that land. His journey of reclaiming the land is full of details that I cannot possibly mention here, but I can at least mention that it was a long and tiring journey full of obstacles and moments of despair and frustration. I am proud of my grandfather who possessed a strong and unyielding will that believed that nothing is impossible.

Back to our vacation on the ranch, we did really enjoy every moment of it. However, as it is always known, good moments do not last forever.  My grandfather’s health started deteriorating. He was diagnosed with very aggressive liver cancer. It was a horrifying shock to us all, especially to grandma. He was admitted to the hospital and was unable to leave until he passed away two months later. From that point on, the ranch was no longer exciting or lively. No member of the family was able to go there again, even grandma had to stay with us in the city.

One day, that I still recall so vividly, there was a family gathering at our house in the city.  My uncle and my father had a decision to tell everybody about. The decision was selling the ranch. Their point of view was that they were both so busy with their work and could not take good care of the ranch as their father did. Of course, grandmother felt that that decision was like a spear in her heart.  She lost her husband and she was going to lose the one place that held her most beautiful memories.  At my young age, I was not able to completely understand my grandma’s feelings. Later on, when I immigrated to the United States, I was able to feel how hard it is to cut all connection and ties with the place where you have lived your entire life.

All these memories were aroused when I was reading Daytripper’s Chapter five, where young Bras was visiting his grandfather’s ranch. I was reminded of how the family used to gather when I saw Bras’s big family. I recalled how my cousins and I were grandfather’s and grandmother’s little miracles. I was reminded of grandfather’s stories when I saw Bras’ mother narrating her son’s birth story. Although all of these were good memories, I recollected how we had to cut all connection with the ranch when young Bras died at the end of the chapter. In other words this chapter brought up sad as well as happy memories.

06 May This entry was published on May 6, 2015 at 6:00 am and is filed under Uncategorized. Bookmark the permalink. Follow any comments here with the RSS feed for this post.

Older: The Present, a Gift Taken for Granted
Newer: Putting Palestine Back on the Map