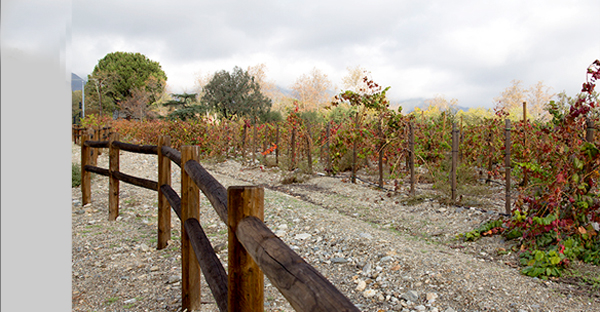 His gaze rises from the table, looking up at the wall,  floor to ceiling one big rack of wine. Dark  cross patterned wood makes up  individual racksfilled with bottles of all shapes and color. Myriad labels of alternating colors stand out in contrast to the dark décor,  attesting to the rich history of the Cucamonga Valley winemakers.

Although his eyes are directed at the wall, Joseph Filippi, of Filippi Winery, stares  past the room.  He looks beyond the beautiful wooden conference table surrounded by four walls of wine and wine paraphernalia, and thinks on the past.

“There used to be over 30,000 acres here, in this area. That’s larger than the amount of vineyards that Napa Valley can even plant,” Filippi said. “Historians have stated that this used to be the largest grape growing region in the state and the country at that time.”

Things change, but the good stuff never goes away.

Since the mid 1800s, the Cucamonga Valley has been growing grapes, citrus and avocados. The warm, dry climate and sandy soil were well suited to the red grapes that were brought over from the old world when the area was originally settled.

David Gordon is a wine expert at the Joseph Filippi Winery. While he has only been there for approximately three months, before then he spent six years at a Temecula Winery. Gordon has a total of 46 years in the wine industry, either as an enthusiast or later an expert.

“There were about 50 wineries in the area,” Gordon said. “Today just 3 remain. The Filippi Winery, Galliano, and a Winery called Rancho de Philo that is only open for two weeks a year.  Just selling a batch of sherry that he makes.”

Urban development has overrun what used to be prime agricultural land. The same land that supported acres of sweet smelling oranges might now be a park ‘n ride, a rideshare parking lot. What once boasted some of the largest vineyards in California can now boast of one of the largest indoor or outdoor malls in the state.

With the change in space and culture in the Cucamonga Valley, wine makers and growers have been forced to adapt.

Victor Ortiz is the General Manager at Filippi Winery. He has worked there for almost four years, but recently moved up to his current position. Some of the first things he did included restructuring the wine tours and the gift shop. He also brought in what he called, “new and happy faces.”

“The entertainment industry has a big impact on wine tastes,” he said, mentioning  the hit movie  Sideways.

“You wouldn’t believe how many people come in here talking about merlot, or refusing to try the merlot, just because of that movie,” he said with a laugh.

Recently, music has had a large impact on wine tastes. Rappers ‘Lil Kim and Drake both mention moscato in their music, leading to a definite increased interest.

“We actually had to start making a moscato because so many people started asking for it. I have asked many people why they wanted that particular wine, the answer is always that they heard it in a song.”

While the sweet wines like moscato are popular, it is not necessarily what they specialize in a Filippi Winery.

“It’s hard to push that sweet stuff when what we specialize in here is the drier tastes,” Ortiz said. “No matter the wine, they really take their time and care a lot about making the wines here.”

“90 percent of our wine here are estate-bottled,” he added.

With the decline of available land in the area, estate grown is becoming harder to be able to boast these days. Winemakers are forced to do things a little differently. One example of this is the local vineyard located at Chaffey Community College.

In 2008, in a cooperative community venture, Filippi Winery planted grapes on the northwest corner of the Rancho Cucamonga campus.

“The college came to us and they were interested in planting a vineyard. I jumped on that of course,” Filippi said. “They provided the land, almost one and a half acres of Alicante grape.”

“We bought the vines and some other things, Toro donated the irrigation, San Bernardino gave us some dirt to add to the rocky soil, but it’s all native dirt,” he added.

Filippi winery maintains, prunes  and harvests the grapes grown in the Chaffey vineyard. From the grapes harvested, they make three types of wine.

“We make a sweet Rosé and a dry red. It’s a little light. And we make port,” Filippi said. “We make a single vineyard wine. We only use that grape. It is vineyard designated, and it’s so close to the winery that we can say it’s estate-bottled wine.”

According to Ortiz, “The Rosé is a big seller. The port, not so much.”

Inside the Joseph Filippi Winery looks like a shrine to the historical significance of the Cucamonga Valley.  Antiques are scattered throughout the room, and dark wood accets the beautiful circular bar and the many bottles of wine. The walls boast black and white photographs along with collectibles of all wine related things. The atmosphere is warm and friendly, with a busy buzz in the air.

Beatrice White is the new assistant manager and event coordinator at the winery. She has worked in the wine industry for over five years, but this is her  first experience with a non-corporate business.

“One of the best things here is the relationships we build,” she said. “We are close to our customers. We have very close relationships.”  Not just customers, but the owners as well.

“It’s definitely different working here,” she said. “It’s more family. That’s what I love about it the most. You get to know the owners.  Joe is actually really funny. He is quite a jokester.“

Nicole Martinez, Wine Club Director, has been at Filippi Winery since April. She runs the wine club, a subscription to the best and newest wines from Filippi.

“We have over 1,000 members in our wine club,” she said. “We are actually in the middle of a wine club shipment to our out of state customers right now.”

The wine club features signature wines either shipped or picked up every three months. The wine choices include three or four bottles each time. However, Martinez said, “the last two shipments actually had five.”

Another employee who went from a corporate job to the significantly smaller atmosphere at Filippi Winery, Martinez noticed an immediate difference.

“This was a completely different avenue and I have learned a lot here. I love that it’s close knit and family oriented,” she said. “We are able to be more personable and connect more with the customers.”

The locals seem to enjoy the atmosphere as well.

“Some regulars come in at least two to three times a week,” Martinez said. “We even have groups of 15-20 peoplewho consistently meet up at the winery.”

“People can get their wine at any market these days. We like to offer more,” he added. “You can taste everything before you buy it here. There’s no risk, you taste it first.”

With the shrinking Cucamonga Valley vineyards, and the frightening decline of wineries in the region, it is nice to still witness new and interesting things coming from the few remaining.

“We are making grapes now that they didn’t even produce back then,” Filippi said. “Like they say, ‘you can’t make good wine with bad grape.’”

12 Jan This entry was published on January 12, 2015 at 10:44 am. It’s filed under base line stories, Uncategorized and tagged Chaffey College vineyard, Cucamonga Valley vineyards, Filippi Winery, history of Rancho Cucamonga winemaking. Bookmark the permalink. Follow any comments here with the RSS feed for this post.