by Julie Cosgrove.  A slideshow follows,  below the story.

On a hot, sunny October morning, two representatives from Spurse, a design collective, led more than a dozen curious students and parents on a foraging tour of campus, titled Eat Your Sidewalk. 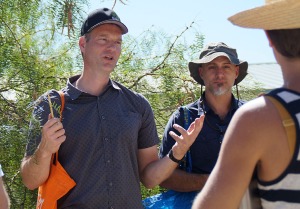 Later that morning, they would return to the Wignall Museum patio to create interesting and tasty dishes from the things foraged.  Spurse is a group of ten artists who aim to encourage people to rethink their sense of place, through an intensely local foraging experience.

Starting in the lobby of the Wignall Museum of Art, Ian Kerr declared that the group would look for biodiversity on the campus, searching out things to collect and later to cook and eat.

Where to start?  Right here, he said, beginning a conversation about   the natural environment.

“You’re an ecosystem,” he said, “it isn’t something out there.  This room is nature because nature is everywhere and includes the bacteria in our bodies and on our skin.”

And, he explained, bacteria is also a necessary element in creating foodstuffs, like yeasts and alcohol.

It followed that he and his colleague, Matthew Friday, would focus upon things literally at their feet.  They stopped the group as soon as they had cleared the sliding door of the Wignall, pointing down to the ground beneath a row of pine trees..  Poking through the thick carpet of needles were sprigs of sows thistle that were quickly picked and sampled.

“You have to get close to bitterness,” Kerr said.  He also warned the group that it is illegal to eat the things that are foraged from the Chaffey campus.  In fact, it is illegal to sell or to serve foraged items in general because there is no way to legally track them like the food we buy in the supermarkets or in restaurants.

“The art department checked it out,” he said.

Rose Cobos, professor of biology, pointed out that Chaffey has a vineyard and a citrus orchard but Kerr and Friday were uninterested in cultivated food. They were here to show how much the landscape can provide.

The group continued to collect and sample things that looked like weeds growing on the bare ground near sidewalks and buildings, beyond the reach of landscaping and watering system.  In these neglected margins,  the natural flora persisted.

Despite their barnyard names, we normally think of these plants as weeds and often want to pull or poison them out of lawns and gardens.

Kerr and Friday stopped frequently to pick, munch and repeat their legal inability to offer it to participants, who then proceeded to pick and sample their own weeds.

“This is prickly lettuce,” Emily Martin, a Montessori teacher.  She had brought half a dozen intermediate- age students from the International Montessori School of Montclair and several of their parents. 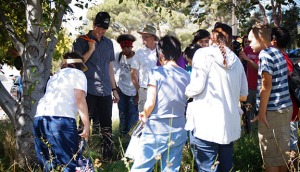 The prickly lettuce was both bitter and buttery in flavor.

“All lettuce comes from this,” Kerr declared of the prickly lettuce which is thought to be the ancestor of the modern lettuces found in supermarkets.

As the morning wore on, students out from their classes joined the procession that marched across the thick grassy lawn down to the open area between the Student Center and Wargin Hall.  They found a bright yellow mushroom but Kerr declined to collect it.

“You need to find a local expert,” Cobos said, “to be sure they’re safe to eat.”  Kerr and Friday agreed that knowledge of what mushrooms are safe to eat changes by region.  They found wood sorrel (also known as oxalis) and deadly nightshade, a poisonous plant.

The group veered through the high grass and across the parking lot to the VSS building where a sweetgum tree had dropped its prickly fruit pods on the lawn.

Art major Tyler Lewis had joined the group after his class and was captivated by the sweetgum tree.

“I’m surprised how much of this stuff grows near my house,” he said.  “There’s a sweet gum  tree in my neighbor’s yard and I never thought of using the seeds for a dye.  That’s something I’m going to do for myself.”

Along the way, Friday asked the group why the grass looked so different from the sprigs growing in the dirt margins of a sidewalk.  All agreed that the watering system provided for the lawn, the chemical fertilizers and weed killers gave the grass an advantage that the weeds lacked.  Nevertheless, Kerr and Friday pointed out that without that help, the weeds would win the day.

“You know,” said Friday pointing to the weeds, “these guys want to go over there.”  He swiveled toward the grassy lawn.

They pointed to purslane which is not only an edible collectible but a plant that loves to grow in cracks in asphalt and cement.  Along with knotweeds, such plants can destroy a parking lot, reverting the landscape back to wilderness.

“They can flip a system,” Friday said.

In all, it appeared there is much to eat growing wild on the Chaffey campus: purslane, sweet gum, dandelions, pomegranates and prickly pears, prickly lettuce, sows thistle, mesquite.  We found the ancestors of our salads growing wild and the ancestor of quinoa in pigweed, according to Kerr.

And not just foodstuffs.  Standing before a spiny yucca bush, Friday cut off a sharp pointed leaf.  He shredded the leaf, demonstrating that the threads could be twisted into a strong rope, the sharp end could be used as a needle in an emergency and the root could be used as soap.  Even the flowers that bloom on the yucca can be eaten in a salad.

Stoppng at a thick stand of leafy rosettes, Kerr instructed the group on the uses of plantain, a medicinal plant brought and spread by European settlers, such that it became known as “white man’s footprint.”  Plantain (the herb not the banana) has anti-bacterial, anti-coagulant properties and can be used as a poultice to promote healing of wounds.

“If you ever get poison ivy,” he said, “rub some of this on it.”  (In Southern California, poison oak is more common than poison ivy).

At the end of the walk, the group dispersed for a short lunch break, while Kerr and Friday retired to the patio of the Wignall to wash and cook what they had collected.  They noted that they had not collected a large enough quantity to offer lunch to the group, given the legal restrictions, but planned to demonstrate their cooking techniques when the group reconvened.

On the menu board:  a salad of greens collected from the “fields,” or at least from the sidewalks, a mix of purslane, dandelion flowers, a fruit salad of pomegranate and prickly pears, sweet gum, salty crisp dandelion chips and a cocktail of tequila infused with  pomegranate and prickly pears.  The tasty dishes would have made an interesting meal, but there was barely enough for a small (and probably barely legal) taste.

Oscar Avina had heard about Eat Your Sidewalk from his English class and was intrigued because in his family, his mother cooks with some of the same things Kerr and Friday had collected.

“She’s a really good cook,” he said, “she even carves watermelons into baskets and fancy shapes.”

She often sends the family out to collect purslane, which she adds to eggs, soups, salads and other dishes.  A creative cook. she learned to appreciate natural foods from her own father who had grown up on a farm and who later grew peaches and plums and pomegranates.

Kerr and Friday were interested in more than sharing their woodsy lore with curious students.  They are part of a collective of ten artists, who live in various parts of the country, seeking to transform people’s interaction with the environment and to encourage different ways of thinking.

Spurse is currently the Pitzer College visiting artist for 2013-2014.  A design collective, they are also working on a project on that campus that will be “transformative…in how students, faculty and staff interact with their immediate surroundings,”  according to the Pitzer College website, Pitzer.edu.

Before winter, the project will be completed and in the spring Kerr expects to be ready for more demonstrations like Eat Your Sidewalk.

By then, their new cookbook, “Eat Your Sidewalk,”  will also be published and available.

Click on any image to start.   Pictures are larger in the slideshow. 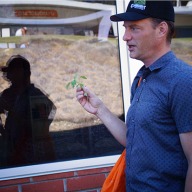 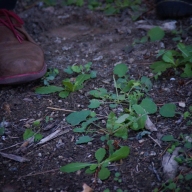 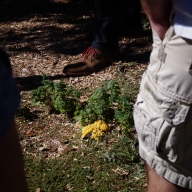 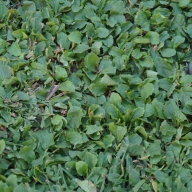 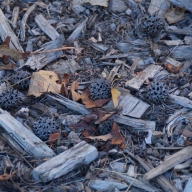 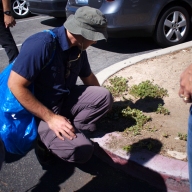 10 Oct This entry was published on October 10, 2014 at 6:15 am. It’s filed under Uncategorized and tagged Chaffey College, Eat Your Sidewalk, foraging, Pitzer College, Spurse, wild foods. Bookmark the permalink. Follow any comments here with the RSS feed for this post.