Nocturnal Wonderland: a pair of stories 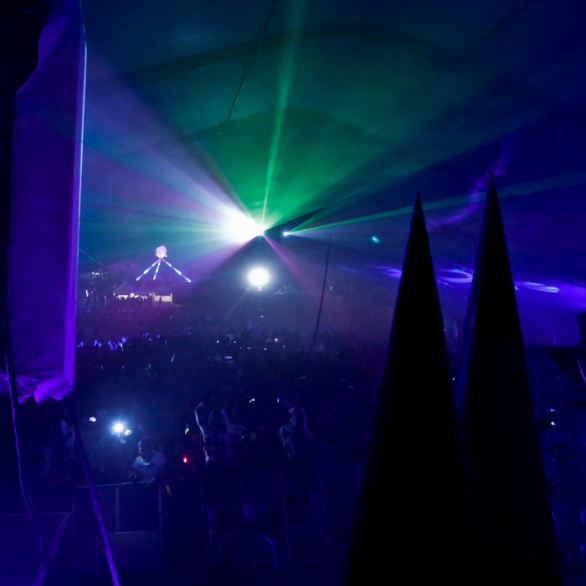 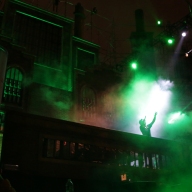 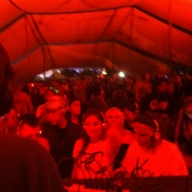 “Eat, Sleep, Rave, Repeat..”  is the way of life for some people, especially those who attended Nocturnal Wonderland on Saturday September 21  in the San Manuel Amphitheater, the largest outdoor amphitheater in the United States.

Nocturnal Wonderland is an event produced by Insomniac Events, an Electronic Dance Music (EDM) event planning company based out of Los Angeles.  Thousands of EDM fans have the night of their lives dancing and meeting people with similar musical interests;  they  dress  in rave attire, some of which includes bikini tops with furry boots and lots of “kandy,”  an array of multicolored beaded jewelry that is often traded by attendees, a staple of rave attire as they listen to their favorite tracks being played and remixed by world famous DJ’s of the EDM community.

To many, the EDM phenomenon is represented by alcohol, drugs, and parties.  But in fact, when attendees enter the compound, they are screened by security for alcohol, drugs or illegal substances.  The interesting thing about events like Nocturnal Wonderland is that when you arrive, you see a large number of ‘older’ ravers, who range anywhere from thirties to mid forties. Although most ravers are from eighteen to mid twenties, anyone curious about attending one of these events will find they are in good company.

When attending an EDM event, first time attendees are taken in by the friendliness of everyone there.  Random people will approach and trade kandy as they initiate the EDM mantra, PLUR, Peace, Love, Unity, and Respect. Veteran ravers create a family environment that makes everyone feel welcomed.

The decorations are amazing for anyone who appreciates sculpting. Sculptures of different sizes and colors can be found throughout the event, some even spewing out fire. All the trees are decked with multicolored lights and lanterns which makes attendees feel as if entering actual wonderland.

The line-up was great, especially when Krewella, Benny Benassi, and Porter Robinson helped close the night out in the Labyrinth. Nocturnal is made up of five stages; The Labyrinth, the largest stage reserved for the star artists, and three smaller venues, The Sunken Garden, The Queens Grounds, and Alice’s House. There is also one stage reserved for the up and coming DJ’s that are selected by Insomniac that have the opportunity to play the Discovery Stage. Insomniac chooses seven artists to play for EDM fans.

Nocturnal Wonderland is an amazing event that only comes around once a year, although there are several other EDM events throughout the year there is something special about Nocturnal that you have to experience for yourself.

22 year old music artist Tyler Rouse has been producing music since the age of 17 and DJ-ing for the past 3 years. He grew up playing in bands all through high school and by the time his last band split up, he was producing intros and interludes for shows.

“My passion for music goes as far back as I can remember,” Tyler Rouse said, “I started listening to a lot of different genres in electronic music, and it made me realize the freedom of being able to create every single aspect of the track. In a band, you bounce ideas off each other to create a unified sound. With producing, the track is a direct reflection of you, giving you the ability to turn any idea you think of into a form of audio that you can share with the rest of the world.”

A discovery project winner from 2012 Insomniac Escape from Wonderland and an alumni discovery project winner for America’s Top 10 Music Festival, Rouse was asked to play for Nocturnal Wonderland in Devore, California. However, tables were turned at this event. For the first time, Insomniac delivered a unique opportunity for their guests to camp before and after the event. At the camp site, the guests had their very own water park, arts and crafts and Silent Disco.

Silent Disco is where people listened to music on wireless headphones, instead of using the traditional a speaker system. The music is broadcast via a radio transmitter. Often times, there are two channels for two DJs to compete for listeners. Nocturnal Wonderland offered Friday night until 2 a.m. and Saturday night until 6 a.m. of Silent Disco to guests who were exclusively camping.

Tyler Rouse, who goes by artist name T-Wrecks, was set to play on Friday night from 10 p.m. to midnight, along with another DJ.

“It was a different experience since I had to DJ with no monitor for mixing. By the time I hear the mix, so did the crowd,” he said. With help from close friends, Rouse presented fans with stickers of T-Wrecks name and logo for listening. “At one point, I had 80% of listeners,” marking a successful night for Tyler Rouse.

Working full time, producing full time and at one point, attending the nearest community college had exposed him to many successful celebrations.

“Everyone has to do hard work. Even though, we sometimes don’t want to. It is an essential to life to get whenever you want to go,” Rouse said.

Playing for Insomniac events, resident DJ for Exchange LA and hold #1 album for a German record label, Kitu Records, for 2 months on Beatport.com (an iTunes for electronic dance music), T-Wrecks also hosts his own monthly podcast “Basslines and Good Times”, on his soundcloud, which includes a mix from himself and a guest DJ from around the globe.

Tyler Rouse, T-Wrecks, is a very sweet and accommodating friend. He has always made an extra effort to remember his fans. When I met him back in May 2013, it was at an underground club in Downtown L.A., through another DJ with whom he had a back to back set. It has been very exciting to witness his success and his passion for the music. His dream is to be able to travel around the world to know as many people as possible through his music and the vibes it creates.

14 Aug This entry was published on August 14, 2014 at 7:19 am. It’s filed under base line stories, Reviews and tagged EDM, Electronic Dance Music, Nocturnal Wonderland, Tyler Rouse. Bookmark the permalink. Follow any comments here with the RSS feed for this post.