I like to sit under the eucalyptus trees at Chaffey College and listen to the young people chattering, the birds singing, the gentle breezes driving through the grass and the pine trees.  More than once, my breath has been taken away by the lovely lonely mountains north of Language Arts and Social Studies.  Many times, leaving late class at night, my mind went contrary and I believed the city lights below the college do not detract from the beauty of the night and stars, but actually are an improvement over nature, that they are lovelier than the stars in the sky because the city lights serve and give comfort to my fellow travelers, my fellow plotters, my fellow connivers, the descendants of the hunter-gatherers, the human beings. 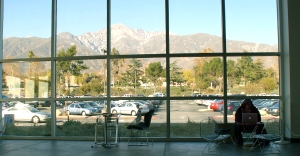 What I owe Chaffey and its professors is inestimable.  I have seen the  pyramids from the air.  (They look like tiny geometric shapes in the beige sand.)  I have seen the Taj Mahal at dawn across the Yamuna River.  I have been on a boat on the Ganges at Varanasi at day too, amazed by the city’s depths of decay.  I have been to Tiananmen Square.  I sat on ancient marble stones in front of the Parthenon.  I saw the columned thing lit up at night as I walked the streets of Athens below.  I walked The Sacred Way in Delphi and put my hands on The Navel of the World.  I was called teacher.  That was the most special boon of all.

After I graduated from Ontario High School, I did not know what to do with myself, so like thousands of young people then and now, I signed up for classes at Chaffey College.  It was the best thing I ever did.  I was grossly immature when I first got there, not mature enough to handle state college or university level work.  I remember people telling me I looked like I was fourteen.  My brain and soul were around fourteen too, I guess.

My generation was born right after World War II.  In the mist of battle, men thought that when they got back to the States, they were going to make sure their children, and all children for that matter, had the very best of everything, including and especially, easy access to higher education.

The men and women from that era also shaped Chaffey College into what it is, a sanctuary on a hill.  They were smart.  They had charm.  They knew, just like the good professors who teach here now know that many of us are first generation college students and require a little patience.

I heard a lady English professor I admired immensely tell someone else that I must be an English language learner.  But I was born here in California.  My mother and father were born here in the United States.  We spoke English at home.

Once I was walking down to the cafeteria with my English 101 professor.  He told me, “James, your verbal skills are very high, but your writing skills leave a lot to be desired.”

Part of me was crushed like a bug on concrete and I was hurt to hear him say that about me.  However, another part of me lit up like a solar flare and understood that my professor cared enough about me to tell me the truth about myself.  He had given me the key to success, a key strong enough that, with determination on my part, could change my life forever.  I began to make a concerted effort to learn how to write well.

It was in the Short Story and Poetry class that I made my boldest successes.  I know some think these classes are frivolous, a silly waste of time and taxpayers money.  However, I am sure the taxpayers got their moneys’ worth with me and many others.

This was before word processing.  I used to cover the kitchen table with sheets and sheets of hand written stories and poems.  Typing my finished work on a manual or electric typewriter was hard work too, but the more I wrote and the more I typed, the more I was able to master the English language.  I got to the point where I was able to write down my deepest thoughts and feelings and have others understand them completely.

I took German at Chaffey too.  It was in German classes that I learned about grammar, how to use it effectively at Chaffey and later at the university.  I absorbed so much of it, that when I first started teaching English Language Learners, that knowledge made it easier for me to teach them English.  It made it easier for me to learn Spanish in order to be a better teacher for them.  I taught children how to write.  I made math clear to many children.  I raised their test scores.  I also taught literature, ancient humans, Mesopotamia, ancient Egypt, ancient Greek and Roman history, all the things I love.

Education saved my life, not symbolically or figuratively but literally.  It taught me, through logic and imagination, how to deal effectively with experiences less than pleasant and it granted me the boon of a richer, deeper life.

The boon, related to the French word bon and the Spanish word bien, is thousands of degrees above reward or payoff.  The boon is something that cannot be bought and something for which one is unable to bargain.  One finds oneself in wonderful situations and one realizes that it was because of hard work and good decisions.  Even if the boon lasts only a little while, life can seem to be very good, very sweet, with joy and satisfaction filling and overflowing.

When I first got to Chaffey, I never imagined I would spend the majority of my adult working life being called Mr. Rodriguez.  For a while I thought I was going to spend my life on earth being called,  “Hey you!” or “hey stupid!”  I was called Mr. Rodriguez in front of my mother and my father, my sister and my brothers.  It was a boon which fell on me like sweet rain in a very dry desert.

Alma Mater means soul mother.  Institutions of higher learning, like Chaffey College, are fertile ground, where what is most precious in us can sprout and in time bloom.

What is most precious in us?  I will give you a hint.  It has to do with our childhood fantasies, those things you dreamed about when you were eight years old, those dreams that come deep from the marrow of your bones, and from the ancestral racial memories that we all pretend do not exist.  Have the guts to remember those fantasies, embrace them, act on them with all your heart.  Turn your back on everyone else and find and fulfill your destiny.

10 Feb This entry was published on February 10, 2014 at 8:35 am. It’s filed under base line stories, Opinion, Uncategorized and tagged Chaffey College. Bookmark the permalink. Follow any comments here with the RSS feed for this post.

Older: Mitakuye Oyasin (We Are All Related)
Newer: Temporary Insanity