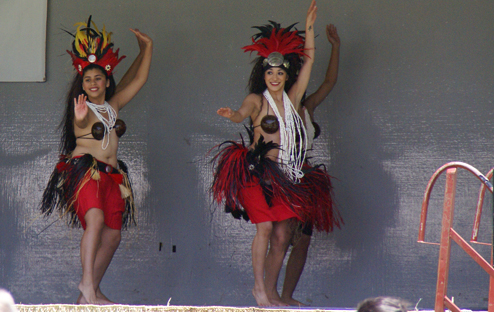 To the sounds of “Aloha, e como mai!”  (Hello and welcome!), a free Hawaiian festival burst upon the green lawn of the San Dimas Canyon Regional Park.  For two days in June, wildly colorful troops of dancers, musicians and vendors brought a taste of “aloha,”  as a fundraising event for the animals of the Nature Center. 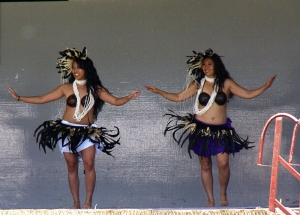 The animals live in a zoo at the nexus of the wilderness and the towns that dot the foothills.  It is home to some five raptors, three snakes, tortoises,  one tarantula. desert tortoises and two deer.

The deer can never be returned to the wild.  Both had been captured by well-meaning people who mistakenly thought they had been abandoned by their mothers.  But Delilah did poorly on a diet of pop tarts and Kitana could no longer be kept by the trucker who brought her home.  Like the blind barn owl and the hawk that became imprinted on humans, they became victims of  contact with humans on their border.

They all became wards of the volunteers of the Nature Center at San Dimas Canyon Park.  Over the years, there have been raccoons, possum, coyotes, red-tailed hawks, kestrils, various owls.  The volunteers even nursed an abused puppy that was dumped at the park.

The Nature Center is in an LA county park and while the county provides space, there is no funding for  the food and medicines the animals need.  So it has fallen on the volunteers to raise money to take care of the animals.

When park superintendent  Roddy Gregory first assumed the position of Park Ranger, he noticed the struggles of the “Nature Associate” volunteers at their yearly fund-raiser.  A member of a Hawaiian musical community, Gregory had experience organizing large  events, like the Lotus Festival in Los Angeles.  His connection to the Hawaiian community provided a unique fund-raising opportunity for the Nature Center.

Seven years ago, Gregory organized the first “Ho’olaule’a,” or festival, of Hawaiian culture, music, and dance as a way to raise money.  It has been a wildly successful way to provide financial security for the animals of the zoo, drawing thousands of dancers, exhibitors and an increasing audience for the show.  This year more than 4000 entertainers and vendors participated, drawing an equal number of visitors to enjoy the free event. 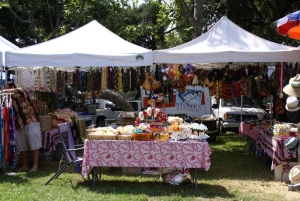 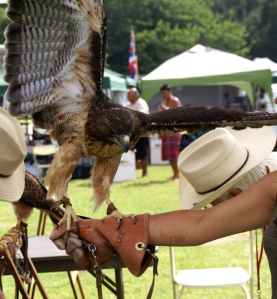 As drums rattled Tahitian rhythms and bands sang updated versions of Hawaiian classics,  Kamaka Brown kept the 18 acts moving.  Gregory himself provided much of the musical backbone for the day, playing with his band, O’ahu, to open and close the event.  O’ahu also  accompanied the troop that included his daughters, Tara Malia and Camille.  (You can catch Gregory’s band at Kealoha’s and Laihaina restaurants.  Kealoha’s is in the city of Chino.)

The entertainment emerged from “Halaus”, or Hawaiian dance studios in which the culture and arts of old Hawaii are preserved and passed down.  The students and teachers  travel from Burbank, Diamond Bar, Laguna, Torrance, Lomita and all points in between.  Their aim is to share “the aloha spirit,” which Gregory defines as “hospitality and respect,”  respect for tradition, for family and for nature.  It leaves the animals  of the Nature Center in the good hands of the volunteers and artists who put on the annual Ho’olaule’a.

Manea Dancers again take to the stage to live music by O’ahu, led by Roddy Gregory.

A blind barn owl is a long time resident at the Nature Center of the San Dimas Canyon Park.

Brightly festooned with flowers and fabric, the vendors are a big part of the fundraising event.

Wiley the red-tailed hawk is a frequent participant in the educational presentations of the San Dimas Nature Center.

01 Oct This entry was published on October 1, 2012 at 5:39 am and is filed under base line stories. Bookmark the permalink. Follow any comments here with the RSS feed for this post.